Jenny is one blogger and content creator who stands out, not just in the FCT but nationwide. Since she started blogging she has created a niche for herself in the blogosphere and beyond. However apart from her educative and information filled blog what caught my attention is her love for men..not just any men but real men! She has decided to be voice for the menfolk and is commited to raising men who will make positive impact wherever they go. As a mother I believe that if women placed the same amount of commitment on raising good sons as they did on their daughters then the world would be better for it. Spoilt men end up becoming lazy, inconsiderate and are just difficult individuals all together.

To add credence to her passion for menfolk Jenny is organising a program tomorrow in Abuja and attendance is FREE! Lets hear more from Jenny below.

When I decided that I was going to switch this blog’s focus to Men’s success and advocating for Men Empowerment amongst other development issues, it was like child’s play.
Many people told me it was an amazing idea and quite bold of me. Some others were sceptical, and rightfully so and may still be but in just about nearly 4 months, the ‘ministry’ had birthed the “League of Extraordinary Men” which hosts the enviable “Be a Man Show” on Facebook and then like in a non-stop flash, the need for having a live Men’s summit was born and it is set to happen this Sunday, Dec. 11, 2016.
Helping men succeed beyond just career and money making, which they are mostly allowed to figure out in adulthood, has been one singular area that has not been supported a lot globally. Due to certain stereotypes and societal expectation on the Male child and then the man, tags like a ‘Real man” had symbolised a strong, focused, loving, rich, never-cries-or-feels-down man who embodies non-human attributes, at least I feel so.
Men have been put in a box , not like women have not, but because a Man’s stability is critical in the life journey and wholesome development of women and children as ”Leaders”, it will only be civil to help him with capacity, the guts and resources to do so by allowing him be real.
A man is first human before he is male.
With such development ideology, I am much more committed to being a mother who will (by God’s grace) raise role model sons, then live my life showing women, men and girls how to treat and raise a knight- a groomed boy/man.
At the end of the day, how we raise our sons will determine the kind of men that will court our queenly daughters.
Raise a King and then prepare a queen for him.
Do not raise a queen and allow her be battered by the insecurity of a cowardly man, who in himself needs help.
I think that with the movement that this blog has risen up to carry out and your ever present support we can change the narratives around Men, and consciously support and groom better men for the sustaince of our world, made up of other men, women and children. 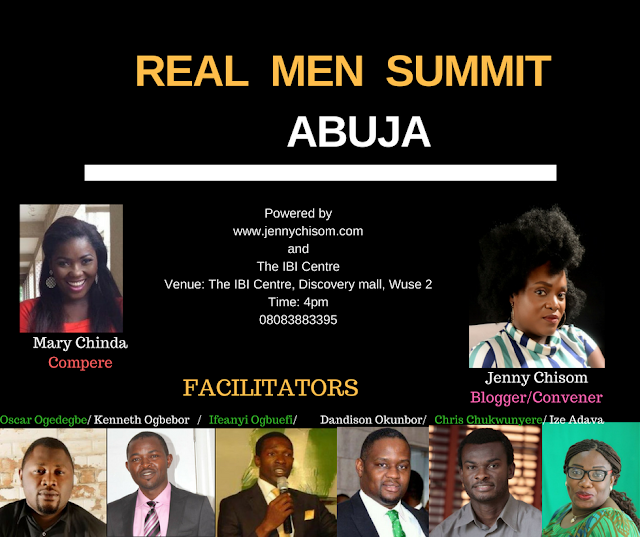 I encourage you to join our campaign and attend the events as well as send your suggestions and by all means let us work together.
For the event, it will a 3 hour heart to heart session featuring Experience sharing, talks on finance, addiction, self awareness, family life, courage and leadership and there will be lots of questions, answered to foster learning. It is a summit for Men to be Real, discuss real issues and get extraordinary results.
Our facilitators include Dandison Okunbor- Serial entrepreneur and pastor, Chris Chukwunyere – Relationship guru, Ifeanyi Ogbuefi- Addiction therapist, Ize Adava – Development diva, Kenneth Ogbebor- Author and entrepreneur, Oscar Ogedegbe – Construction accountant and curate amongst every extraordinary man that will attend. The Enugu based Phenomenal TV personality, Mary Chinda will be the official MC and we will have Adanna Enwezor, MD Photizo Life foundation as a quintessential support for counselling.
This event promises to bring healing, direction, capacity and ensure that men win in life carrying along their families and become role models in spite of the challenges of our age.
To get any man to attend kindly send him this link to register FOR FREE.
They can also simply send a text message to 08083883395.
Share
0 Shares
Jenny Chisom
Previous Post Next Post

Hi my name is Chiomah - I am a lawyer by day, freelance content writer by night and a mum round the clock. I love God, love my husband and love my children. I love people and enjoy talking to young women (and men) and encouraging them to be all God has called them to be. This blog is a journal of my thoughts, inspirations and experiences over the years. I write about relationships, inspiring people, food and more. Leave a comment and thanks for dropping by!